A Global is a numeric variable that can be referenced from all over the game, including in Conditions and Papyrus. Globals can represent predefined values, such as Dogmeat's attack ranges or how much of the game's introduction to skip (pictured); or they can be used to keep track of things that change over the course of the game, such as how long it's been since Cait has used chems. (No, really.)

Globals are usually created for use in Conditions. Though conditions are capable of inspecting values in other systems, like conditional Papyrus properties, it's often better to keep things separate so that they can be edited independently. 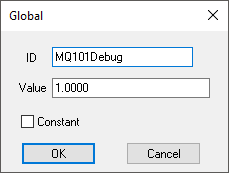