Define keywords that allow you to tag associations across forms. The Keyword object is found within the Object Window under the Miscellaneous Category.

Some keywords are used by Game Systems, such as the weapon attachment system, and those are covered in the Types section below. Other keywords are semantic, which means that they're used to describe things. For example, Bethesda uses the semantic ActorTypeRobot keyword on every robot actor (and modders should, too!), so Conditions can check for that keyword to see if they're dealing with a robot, even if the robot belongs to a modded or DLC Race. 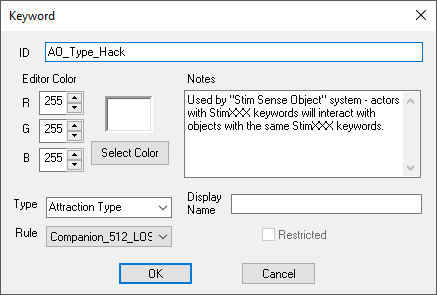 Keywords now have a Type field that determines the type of association this is used for.