This page goes over most of the new features introduced to the Creation Kit since the release of Skyrim. If you discover any more make sure to add them here. Also feel free to spruce this up as it was added to bit-by-bit over the course of a few years.

You can now set the rotation or position of an object to match any other reference in the Render Window. Note that this works with multiple selections, too. Use one of the shortcuts below with any object(s) selected. A crosshair cursor will appear. Click on the desired object to align.

Alt-F will toggle your FOV to/from that of the game. 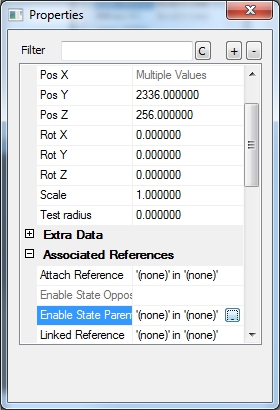 Right now it only shows data for References. The plan is that it will eventually be able to show data for forms as well.

Status bar will now indicate whether or not you currently have a snap reference.

The Creation Kit now has layers!

Layers are unique objects, not tied to a specific cell/area. As such, they must have unique names. The Layers dialog will populate with any layers used by a reference in your loaded area. Note that the layer an object is tied to is data on that object, not the layer. This means that many people can add/remove objects from a layer without having version control issues.

The Default Layer is persistent across the game. It's essentially the "not in a layer" layer. IF you want to remove something from a layer, simply add it to this layer.

It is now possible to rotate a group of objects around their own local axes, rather than a shared axis.

Found on a new tab in the old Find/Replace window "Ctrl-F", the Wildcard Find/Replace feature allows you to replace all selected refs, refs in cell, or refs in entire game, with a set of other forms in the editor that match the same naming convention, and wildcard position. 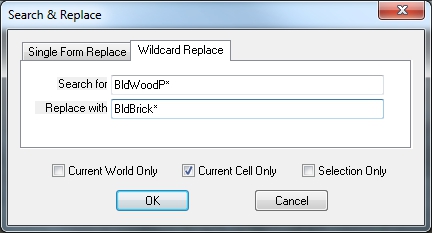 Select All Refs in Use Info Window[edit | edit source]

You can now select all the references that show up in a Use Info window. Using the new Properties Panel you can make change to all refs that you select. This keeps you from having to go to each cell in order to make changes to each reference. 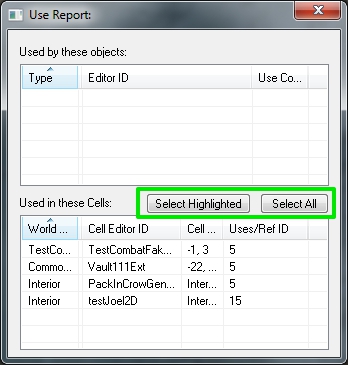 Right-Clicking in the render window with a reference selected will give you the option to select all the linked refs to/from the selected reference. (Useful for selecting all points in a linked ref patrol, for example).

Ctrl-Alt-D Duplicates a reference and LinkRef's the old reference to the newly created one.

Hold Z,X, or C will now allow you to move a reference, even if your cursor isn't over it.[edit | edit source]

Exactly as described in the headline, :)

Hold Alt while moving a ref to force it to snap to collision, and align to the normal of the mesh.[edit | edit source]

You can now gather references into selection groups. This can be handy for shelves of references you want to generally be able to move all at once, or a any references in a specific orientation that you plan on moving as one unit most of the time.

Ctrl-Space allows you to quickly set a Linked Ref for the currently selected reference.

This really just brings up the batch window with a reference already selected (the one you clicked). You can perform any action from the batch window. And when you hit "Do" it will close the window.

If your blocking out your cell, or just making a quick test cell, then there's no need to worry about lighting, other than that you don't want it pitch black. Simply click this

Set Up Default Lights button and 4 lights will be created for you at each edge of your cell with the correct scale in order to illuminate the whole cell. If you click the button again (lets say you've blocked out more of your level), and you haven't deleted any of the lights, it will move the lights instead of creating a whole new set of them.

It's now possible to use a special selection mode which attempts to intelligently find objects snapped to your currently selection. The detection algorithm is relatively simple, and may not be relied upon as a fool-proof way to select snapped pieces. We suspect it will be most useful for quickly selecting smaller sets of snapped objects, such as a section of pipe kit.

If you hold ctrl+shift and left-click & hold on a reference and you can "paint" your selection along several reference. If the first reference you start 'painting' on isn't selected then the painted references will be selected. If it is unselected then you will be deselecting references instead. 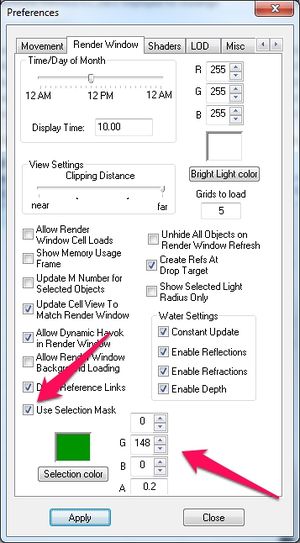 Toggling this on will highlight the currently selected object with a color/opacity of your choosing. These settings are located in you Render Window Properties, on the Render Window tab, at the bottom)

You can select references in the render window and export to an *.fbx file which can be viewed in 3dsMax.

Hold Alt-S, with the reference selected, then click and drag in the Render Window.

Alt-Shift-1 Will hide any ref that isn't currently selected. As usual, Alt-1 unhides everything.

Holding N while moving a reference will make the camera move with it.

You can now select references in an unloaded cell via the "Cell View" window, then right click them and select the new "Copy" option in the drop down.

Object Types can be assigned a color for easier navigating. Go to View->Object Window Colors.

A Parent Quest Stage can be set in a Scene (Phase Start/Complete, Scene Begin/End, and on Timers), or on a Topic when it Begins or Ends.

The drop down also shows the stage's description.

You can now put notes on each quest stage, which then show up next to the stage number, and in any stage select drop-down in the editor. (And when using SQS in the game console.) 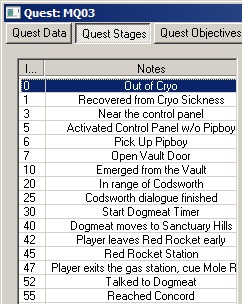 
Make a Shared Info from a Scene[edit | edit source]

Making a Shared Info from a Scene (Make Shared Info button) will add the GetIsAliasRef automatically.

Can now run conditions on the player.

They are now named Run on Start? and Run on Stop?

Scripts, when compiled at editor start or by compiling multiple from the Papyrus Script Manager, will now compile as many scripts at a time based on the amount of threads your PC has. This makes compiling scripts take a fraction of the time that it used to take, speeding up editor start times immensely.

You can now attach scripts to Moveable Statics